Update: You can find a post about the iOS remake of my X-wing Targeting Computer app here.

I’ve always wanted to be an X-wing pilot, helping the Rebel Alliance in their desperate struggle against the Galactic Empire. Unfortunately we haven’t yet acquired the technology in this galaxy to build reliable and safe X-wing fighters. However I wasn’t gonna let that put me off and embarked on a mission to bring my childhood fantasy one step closer to reality.

Thanks to Adobe AIR for Android and some guidance from the force I’ve constructed a GPS-enabled version of the Targeting Computer found within Luke Skywalker’s X-wing Fighter. So now you can at least pretend to be an X-wing pilot while you’re driving your car.

It’s really simple to use. Just lock in your target location and start driving until you eventually reach the exhaust port, er, I mean destination. Your distance to the target will be continuously updated as you drive and you can even hear radio chatter from your fellow pilots! 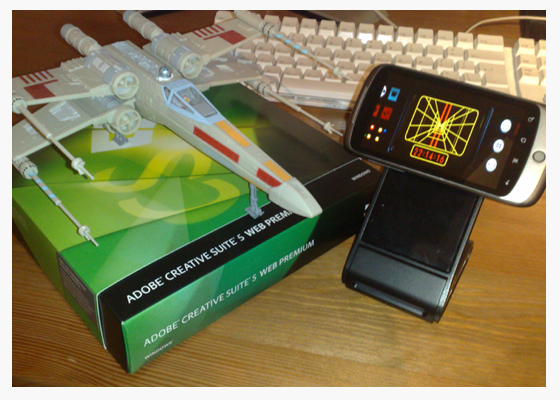 When you’re not driving why not take your Targeting Computer to the office and use it as a clock. Yup, the Rebel Alliance thought of everything. Just switch it to Clock mode and mount it on your desk to impress the hell out of your friends. You can even set an alarm and watch as your Android phone closes in on the target time.

Now all I need is for George Lucas to spot this post and snap my idea up. George, we could both make a lot of money from this one. What do you say? 20-80 split? 80 percent for me and 20 for yourself. I think that sounds fair 😉