Migrating to Swift from Flash and ActionScript

Radoslava Leseva Adams at DiaDraw reached out to me recently. She’s the co-author of Migrating to Swift from Flash and ActionScript and wanted to know what I thought of the book. Well I must say it’s an essential piece of reading for any Flash and/or Adobe AIR developers looking to learn native iOS development with Swift. In fact, you really don’t need to be an ActionScript programmer at all. Radoslava and Hristo’s book book can be easily picked up by someone from any other development background too. 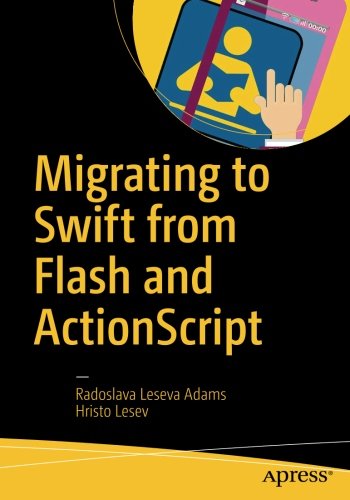 The book’s split into four parts, beginning with the setting up of Xcode all the way through to dealing with the migration from ActionScript to Swift. Along the way, you’ll learn the basics of Xcode including how to get your first project running on a device, and a comprehensive introduction to Xcode’s debugger. The book also spends time introducing the reader to version control with Git before moving onto various profiling tools provided by Xcode via its Instruments suite. Later on you’ll revisit debugging and learn a few advanced features.

For the majority of the book you’ll be learning Swift. The Swift programming language is only part of the battle though. You’ll also need to learn the comprehensive iOS SDK. Thankfully the book has you build 12 simple example applications, with each teaching you something new about the various frameworks available to iOS developers. During these practical examples you’re also introduced to the various design patterns used when building Swift apps such as Model-View-Controller, delegation, and target-action. On top of that you’ll be creating and working with Xcode storyboards to achieve the visual layout of each example app.

While you’ll learn Swift as you progress through each chapter, the final part of the book is a more focussed look at the language itself. While it’s not a comprehensive Swift manual it helps you hit the ground running and encourages you to experiment by typing your code examples directly into an Xcode Playground.

I was also pleasantly surprised to see that there are chapters covering both the SpriteKit and SceneKit frameworks, which are useful for developing 2D and 3D projects respectively. Given that most Flash and AIR developers will be used to creating rich visual content, both these chapters are welcome additions.

Although I’ve personally been working with Swift since the language was introduced, I still found I was able to learn new things from Migrating to Swift from Flash and ActionScript. It’s really four books combined into one, although it’s worth noting that you don’t have to work through things sequentially. For the most part you can jump between sections as you see fit.

Great value for money and an essential resource for anyone new to iOS and Swift.