It’s often convenient to playback video remotely from a web server rather than bundling it directly within your app. This is necessary, for example, in apps where the user has to select from a collection of dynamically uploaded video.

Let’s see how to progressively download either an FLV or H.264 video from the web and handle buffering of that video.

This tutorial is a previously unreleased recipe from Flash iOS Apps Cookbook and supplements the content found in Chapter 12, Working with Video and Audio.
Flash iOS Apps Cookbook provides the recipes required to build native iOS apps using your existing knowledge of the Flash platform. Whether you want to create something new or simply convert an existing Flash project, the relevant steps and techniques are covered, helping you achieve your goal.

Depending on your preferred video format we’ll work from either the code you wrote as part of Playing Local FLV Video or Playing Local H.264 Video. Alternatively, download this recipe’s accompanying code bundle and use it as a starting point.

Both FLAs have had a movie clip named bufferingIcon added to the center of their stage. We’ll show this clip whenever the video is buffering. 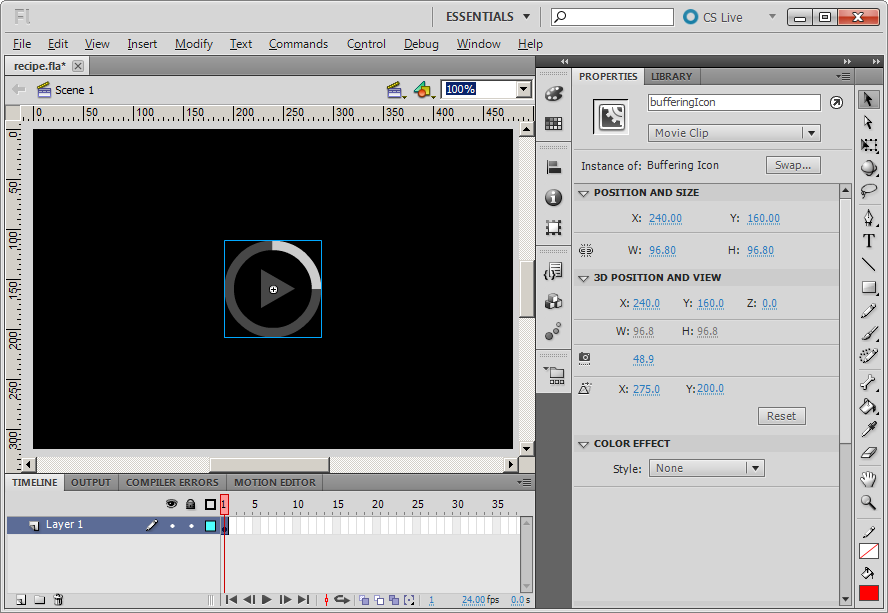 View of your FLA's stage.

If you examine either FLA’s AIR for iOS settings you’ll see that, unlike the local equivalents, there’s no need to bundle the video with the app. Instead we’ll upload the corresponding video to a web server. If you don’t have access to a web server then you’ll need to purchase a package from one of the many available web hosting companies.

If you already have access to a web server then you’ll likely have an FTP client for uploading content to your space. If not then consider installing FileZilla. It’s free and can be downloaded from filezilla-project.org for both Windows and Mac OS X.

The ActionScript required to play a video from the web isn’t that dissimilar to the playback of a local video. In both cases, a technique known as progressive downloading is employed, where playback begins after the video has partially loaded. This allows playback to begin as soon as possible without the whole video having to first be loaded and held in memory. You’re probably already familiar with this type of video streaming as it’s used by popular sites such as YouTube and Vimeo.

To enable progressive downloading, the NetStream object holds an internal buffer, which is filled with video data as it becomes available. Once filled, playback of the buffer’s data will commence. As video data is played, it’s removed from the buffer and eventually discarded from memory.

When playing local video from the file system it’s unlikely that the video buffer will ever become empty as your application will have almost immediate access to the data. However, this won’t be the case with remote video and the number of interruptions during playback will depend on the video’s size, the device’s download speed, and the bandwidth capabilities of the server hosting the video.

The NetStream class provides the bufferTime property, which can be used to dictate how many seconds of video data should be contained within the buffer before playback can commence. The larger this value, the longer the user will have to wait before the video initially starts playing, but the less likely it will be that the buffer becomes empty during playback.

It’s possible to monitor the status of the buffer by listening for the NetStream object dispatching NetStatusEvent.NET_STATUS. By examining this event’s info.code property you can determine when the buffer has become empty, and when it has filled again. This is useful as it allows you to inform the user that the app is currently waiting for more video data in order to continue playback. In this recipe’s example code, we did this by making the bufferingIcon movie clip visible when the buffer became empty. When it filled again, we hid the movie clip from view, providing the user with an unobstructed view of the resumed video.

When downloading video from the web, it’s advisable to warn the user beforehand. After all, if they’re using a carrier’s cellular network at the time then they could incur significant data costs.

The NetStatusEvent object can be used to determine the status of more than just the NetStream object’s buffer.

The NetStatusEvent object is dispatched in response to a plethora of useful status changes, errors and warnings. Here are just a few strings that the info.code property can be queried for:

You can determine the code’s type by examining the info.level property, which will be set to one of the following strings: status, error or warning. For a comprehensive list of supported strings, perform a search for flash.events.NetStatusEvent within Adobe Community Help.

The flash.net.NetConnection object also dispatches NetStatusEvent objects, which you can listen for.

While it’s not covered within this book, it’s possible to stream video from a Flash Media Server using the NetConnection and NetStream classes. Flash Media Server is a server solution optimized to deliver real-time media and is ideal for high-volume websites where performance and reliability are critical.