I’d been itching to do a bit more Swift development recently but hadn’t had much spare time. Plus, every time I set myself a small project, it quickly grows arms & legs and ends up another one of those things I started but never got close to finishing. 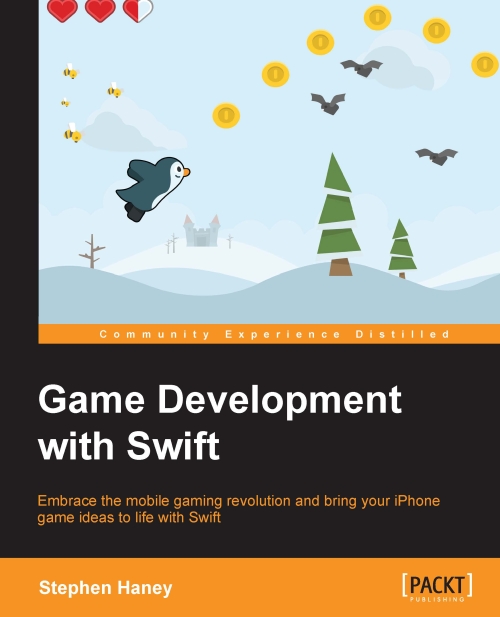 So I thought I’d just pick up a book and spend a week or so working my way through it. That way I’d get some more hands-on Swift experience and actually have a pretty good chance of finishing something.

Picking a book from the seemingly endless number of Swift titles out there isn’t easy, but in the end I opted for Game Development with Swift, which was published by Packt, who just happen to be the chaps who published my own book a few years back.

The book ticked all the boxes for me: it didn’t focus on teaching you the language; it covered Apple’s excellent SpriteKit graphics framework; it was fairly short and to the point; and it also promised to show you how to build your own endless runner game. In fact, I was extremely impressed by the author’s ability to lead you through the process of building a game. He did an extremely good job of introducing new game concepts and then applying those concepts to your project’s code.

In fact, the author did a similarly good job when it came to introducing language features that may trip-up those new to Swift. While the book doesn’t necessarily teach you Swift, anyone with a few years programming experience under their belt should be able to pick things up without too much trouble. It was written before Swift 2.0 was released so there are a couple of code fixes you’ll need to make in the final few chapters. However, it’s nothing you won’t be able to figure out for yourself.

Game Development with Swift is an enjoyable title and does a great job of highlighting just how easy Apple’s new programming language is to work with. You’ll also come away with your own little endless runner game and an appreciation for how awesome SpriteKit is for quickly bashing together 2D games.

The book’s author, Stephen Haney, deserves a lot of praise for cramming so much into such a small page count and also for the way he effortlessly takes you through the process of building a small game. If you’re looking for a quick introduction to Swift and SpriteKit then you should definitely give Game Development with Swift a read.

If you don’t quite have the confidence to jump straight in without knowing a bit more about the language then why not work your way through my Quick Start Guide to Swift tutorials first.