If you’ve overlaid the latest AIR SDK onto Flash Professional CS5.5 then you may have noticed that it’s no longer possible to set your app’s Home screen name from the AIR for iOS Settings panel. Previously the value of the App name field was used to set the application’s screen name.

For example, setting the App name field to My Test App should guarantee that an icon with the same name is shown on the device. You can see this in the screenshot below:

Pre AIR 3.1, the value of the App name field would dictate the app's screen name.

However, after overlaying the latest version of the AIR SDK, the application’s screen name is now incorrectly set to the name of the SWF published from your FLA. The screenshot below highlights this: 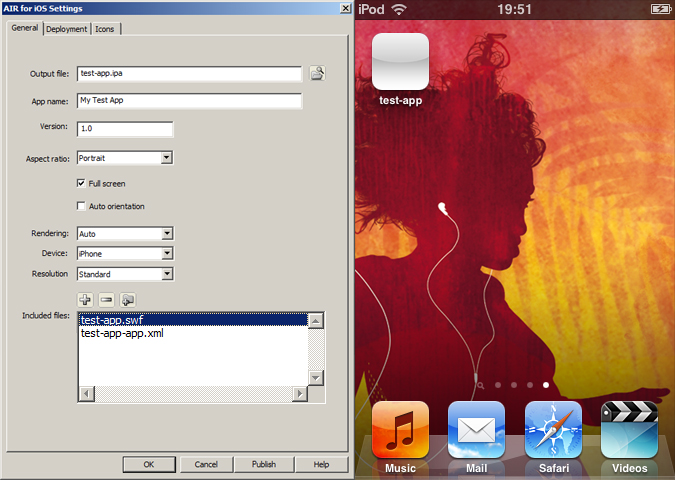 The app's screen name is now set to the published SWF's name.

Unfortunately this has been caused by changes in AIR 3.1, meaning you’ll need to manually edit your FLA’s application descriptor file in order to correctly set the app’s screen name.

There are two possible changes you can make to the descriptor file to set your app’s screen name.

The first is possibly the most straightforward and involves changing the value of the <filename> tag:

The second approach is to localise the <name> tag for multiple languages. For example, change its value from:

More detail regarding localisation of application names can be found in this Adobe AIR article.

Also, remember to save the changes to your application descriptor file before opening the AIR for iOS Settings panel again.