‘What the heck is GamesFlash?’ I hear you ask. ‘Is this another one of your hugely ambitious personal projects that never got finished Mr Caleb?’ Well yes and no. You see I did actually finish this one, although I do confess to having spent the last three years of my life on it. Strictly speaking, saying I’d finished it is actually a little white lie. You see the very nature of GamesFlash means that I suppose I could go on indefinitely working on it but I felt the time was right to move on to other things, including this blog. 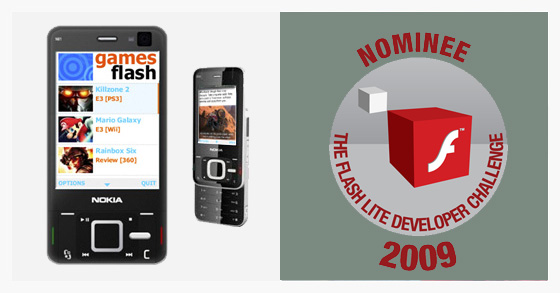 So what is it? We’ll it’s a Flash Lite application that delivers the latest video game reviews, news and videos straight to your phone. Although at its heart it’s much more generic than that and can really deliver any content you like. GamesFlash was used as a test case to demonstrate the technology behind it. I ran GamesFlash over a two year period along with a few friends who helped me regularly update it with new articles. While I was producing content I was also continually adding new features and optimising the code base to squeeze it onto as many handsets as possible. As you can imagine it didn’t really leave me with much time for anything else.

When I started work on GamesFlash, browsing the web on a phone wasn’t a very satisfying experience and thanks to high data charges was also very expensive. The aim of GamesFlash was to get round this by bypassing the phone’s web browser completely and instead deliver graphically rich but bandwidth light content via the Flash Lite player. Articles delivered to the phone were template based and each template had a very small set of tags enabling me to keep data transfer to a minimum. All graphics were also optimised on the server for the device, again ensuring very fast and inexpensive downloads.

A few years down the line I also introduced streaming video for those who had a suitable data plan for their phone. Users were able to watch video trailers that accompanied many of the articles and I felt it added significantly to the experience. However by this point the iPhone was a really big deal and had revolutionised the mobile web experience. Suddenly in an attempt to catch-up, every phone manufacturer was producing pretty decent browsers for their handsets and the carriers were finally offering affordable data plans.

All this meant that GamesFlash was starting to look a little obsolete in its approach. Plus the scale of the project had started to get seriously out of hand. To be honest it had stopped being a one-developer project some time ago but I kept furiously chipping away at it determined to realise my original vision. Maintaining both the server-side and client-side code was a huge strain and I also made the decision to completely re-write the client one year into the project. It was necessary in order to get it running on mass-market devices such as Nokia’s Series 40 handsets but with very limited spare time on my hands it took around 10 months to do.

I’m very proud of GamesFlash and what I managed to achieve considering the scale of the project. In its first year alone GamesFlash was downloaded 8000 times, which I thought was pretty remarkable considering I could barely find the time to publicise it – another drawback of doing it all myself. It was also a finalist in this years Flash Lite Developer Challenge which was quite exciting and in many ways felt like a reward for all the time I’d put into it.

However with the mobile landscape having changed so much I feel there’s no longer a need for something like GamesFlash. It could perhaps survive in some capacity for low-end handsets where web browsing can still be a clunky experience but with smart phones gaining greater market penetration I think more and more people will be able to access on their handset the same content they view on their desktop.

I’ve learned a lot during this project and I’m delighted that I got everything into a more-or-less complete state and that people actually used it. But the time is right to move onto new things. If you’ve made it this far then thanks for letting me get all this off my chest, and if you fancy taking a peek at GamesFlash then you can actually play around with it via the web-based emulation below.

Use the mouse to click on the handset’s softkeys and navigation pad, or alternatively click to focus then use the cursor keys and the return key on your keyboard.