I’ve been thoroughly enjoying the AIR for Android pre-release but given my limited time I certainly haven’t been able to explore everything it has to offer. So it was extremely pleasing to find out that there will be a few books on the subject coming out at the end of this year. 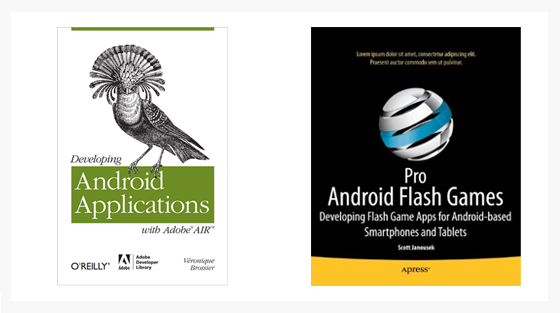 Published by Apress, ‘Pro Android Flash Games‘ by Scott Janousek and Jobe Makar looks like it could also be an invaluable resource for budding Flash mobile developers. As well as covering the Adobe AIR API, the book will also explore how to take advantage of hardware acceleration, and discuss game design principles and considerations for the Android platform.

While I’m here I think I’ll take the time to plug another book that I’ve found extremely useful when tinkering away on various Flash Lite projects. ‘Flash on Devices‘ by Scott Janousek, Elad Elrom and Thomas Joos is a very comprehensive book looking at Flash across various mobile platforms. Hopefully we’ll see an update of this book at some point.

With AIR for Android hopefully being released later this year, Apple accepting content written using the Packager for iPhone again, and Flash Lite 4 appearing on many upcoming devices, it is an exciting time again for Flash developers. I’m looking forward to seeing all the great content the Flash community produces for mobile.