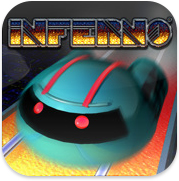 My buddy Alex is probably the best programmer in the world! He has a particular passion for all languages containing the letter ‘C’ and he’s so good that he bashes games together during his lunch breaks! And here’s one of them. Inferno is Alex’s first Xbox 360 game, which you can pick up from the Xbox Live Indie section. It’s a port of an old 8-bit game so if you like your retro arcade stuff then it should be right up your street.

Oh and if you’re wondering what this post has got to do with Flash then the answer is pretty much nothing. But then again I did have a conversation with Alex the other day and he reckons that Flash is the perfect platform for bashing together Android apps. In fact, he’s considering porting Inferno to Android using it. So there you go.